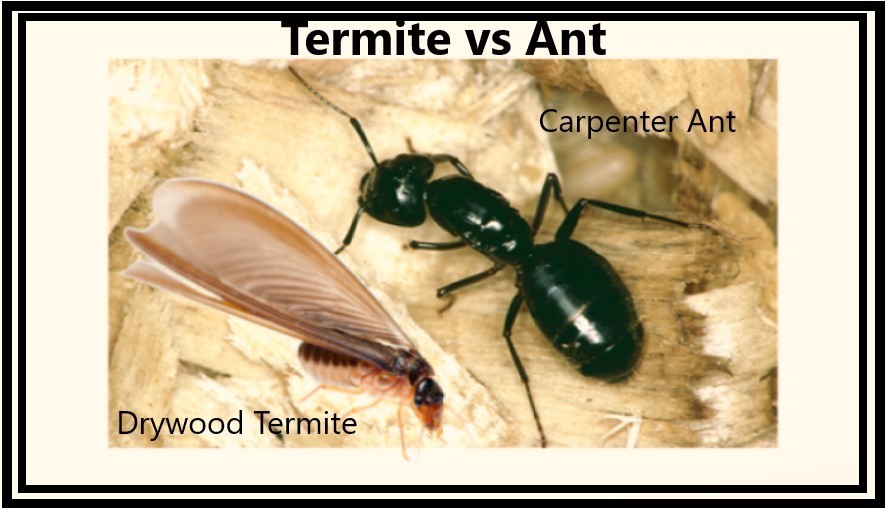 Termites vs The Human Habitat …………………..Know The Opposition!

Every spring as the weather begins to warm, termites surface in search of new structures to infest.  The first termite explorers to show up are the swarmers. These winged invaders look for the most appetizing structures in which to set up new colonies. Being new kings and queens they’re the beginnings of a termite infestation.

First, it’s important to distinguish between termites and other insects.  The most often misidentification made, is between the flying ant and the flying termite.  Ants have a pinched waist and bent antenna, whereas termites have a cigar shaped body and straight antenna. Ants have four wings with

one set larger than the other, termites have four wings that appear to be the same size.

Not knowing the difference between an ant or termite can cost you a lot of money.  Getting rid of ants requires a completely different treatment than the treatments used to get rid of termites. An ant control treatment is much less inexpensive than that of termites.  So, take a good look at this graphic and note the differences.

Another striking difference is ants may be seen crawling along the ground or around your kitchen sink foraging from a central or multiple nesting sites. They are extremely visible.  Foraging termites of the subterranean variety are very rarely seen outside of their subterranean (below ground) nests and passageways.  They even construct, mud tubes, as subways between the ground and wood structures in order to avoid exposure to sun and open air.  Drywood termites, once they infest a structure, spend their time inside wood members in what are known as termite galleries. 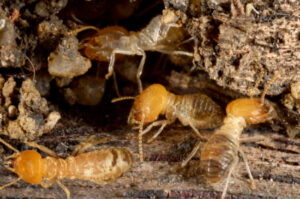 Termites are hidden enemies whereas ants are in your face, nuisances.

Home and other property owners are better equipped to detect warning signs of termite infestations, if they know what type of termites are most prevalent in their neighborhoods. No matter what the species of termite, they are “the silent destroyers”.  Damage they cause to structural wood members, flooring and even wallpaper can go undetected for years and the worst news is, this damage isn’t covered by insura

It is important to know the players in this game of survival.

Drywood termites often establish nests in roof materials, wooden structural framing, and they may show up in wood laying around a structure.  They’re known to infest wood furniture making them easy to transport from one location to another.

Subterranean Termites are considered to be, the most destructive of all termites.  They use their saw-toothed mandibles to tear off tiny pieces of wood, one bite at a time and they can do this 24 hours a day, 7days a week, for years on end.  “Subs”, live in underground colonies, containing up to 2million individuals and build transportation tubes out of mud (dirt and their saliva) to get them to their feeding opportunities. They travel out of the ground, up a foundation and into a wooden structure really fast.

Dampwood Termites, due to their need for excessive moisture, do not as a rule infest structures, but they can if conditions are right.  Their normal habitat consists of logs, stumps, dead trees and even telephone poles.  As their name suggests, they are attracted to moist areas such as around A/C unites, leaky pipes, unvented crawl spaces, attics and basements.

Formosan Termites, the scourge of our southeastern United States, have been found in some Southern California homes.  These subterranean dwellers are considered to be the most aggressive, causing considerable damage in less than 6 months. As a kind of subterranean termite, they too construct mud tubes.

Think you might have termites? Call Corky’s Pest Control 1-800-901-1102 for a phone quote. Ask questions or check us out online @ corkyspest.com.

efore they start damageing  your home again!   Corky”s Termite Protection Plan includes our famous “Corkys Ultimate Pest Control Service” that gets rid of Ants and Spiders and control ticks, whiteflys/aphids and Mosquitoes on your property too!