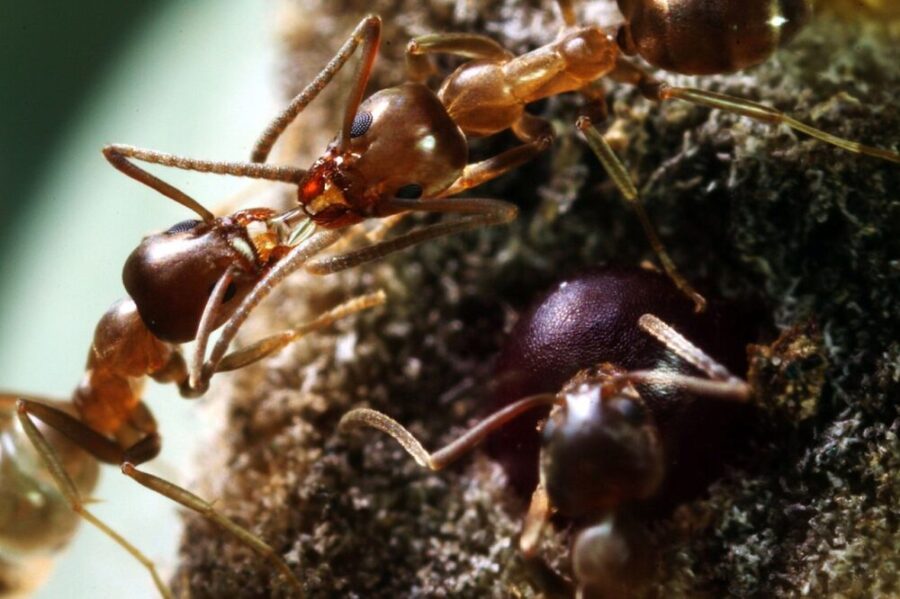 Ants are a fascinating group of insects capable of achieving so many great things. 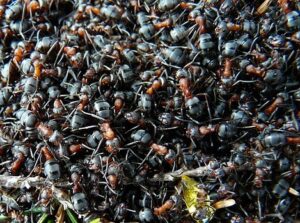 Ants operate as a matriarchal society, led by a queen of the colony.  There are species that are multi queened, the Argentine ant for example

. No matter how many queens are in the colony, the queen is a baby machine. After mating, in mid-air, the queen goes on to produce fertilized eggs and the male dies (hopefully, happy and satisfied).

Besides giving orders to her body servants and colony workers, she works extremely hard to continuously lay eggs.  Eggs, babies and maturing adolescents are the responsibility of nursery workers. 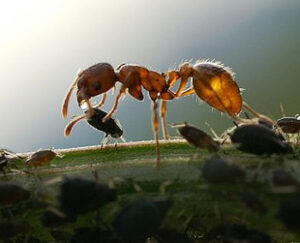 Worker ants are the lifeblood of the colony.  They are the food gathers, farmers, engineers and some are designated specifically as warriors (soldiers), the protectors of the colony.  As farmers, ants are ancient and experienced. Ants cannot digest the cellulose in leaves, but some fungi can, so ants cultivate these fungi in their nests, bringing them leaves to feed on, then use them as a food source.  Farmer ants secrete antibiotics to control other fungi that act as weeds. They also spread their waste to fertilize their crops.  Some ants act as Dairy Farmers, nurturing, milking and even herding, plant insects.  These insects are an important source of food, known as, “Honeydew”.

As engineers, worker ants have been known to build bridges and even rafts with their bodies to cross streams, keep them from drowning and to move from place to place.

Their most amazing constructs are their nests.  Given a week and a pile of dirt, a colony of garden ants will transform it into an underground construction about the height of a skyscraper in an ant-scaled city. It will be accomplished without a blueprint or a leader, just thousands of insects moving specks of dirt creating a complex, sponge-like structure with parallel levels connected by a network of tunnels. 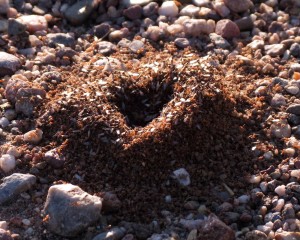 This construct will contain, living quarters for workers, birthing chambers for the royal queen or queens, food storage, crop growing chambers, and even waste disposal areas.

No society exists without those who protect it.  Soldier ants are the warriors of the ant species. They are larger, stronger and have powerful mandibles that work like pincers to fight off predators threatening the colony. They also

help carry the heaviest loads of prey back to the colony, from foraging expeditions.

Although ants readily make a pest of themselves when they start to invade our personal spaces, they do have a purpose above and beyond being annoying.  Ants are one of Mother Natures, “little helpers”. They till the soil, get rid of the dead and rotting, create spaces where other insect species can thrive, and provide food for many thousands of other animal species, including man.

Even pest ants, like the Carpenter Ant, that are a danger to wood structured homes and buildings, are just doing what comes naturally, returning raw (dead) wood back to the soil so other trees may grow.

So, as much as we appreciate their job functions in nature, when ants are crawling along our driveways and walkways heading towards our homes, when they are massing around our kitchen sinks and bathtubs, or scavenging food from our cupboards, it’s time to get rid of the ants.

Ants are persistent and need to be stopped outside before they get inside.  Consistent and effective ant extermination methods are the only way to keep them under control.  Corky’s Ant Control Service is designed to control ants in the landscape and keep them out of the structure.  This service program can be enhanced by Corky’s Ultimate Pest Control Service, which not only controls ants but includes spiders, aphids, whitefly (plant insects that are food for ants and spiders), ticks, mosquitoes and more.