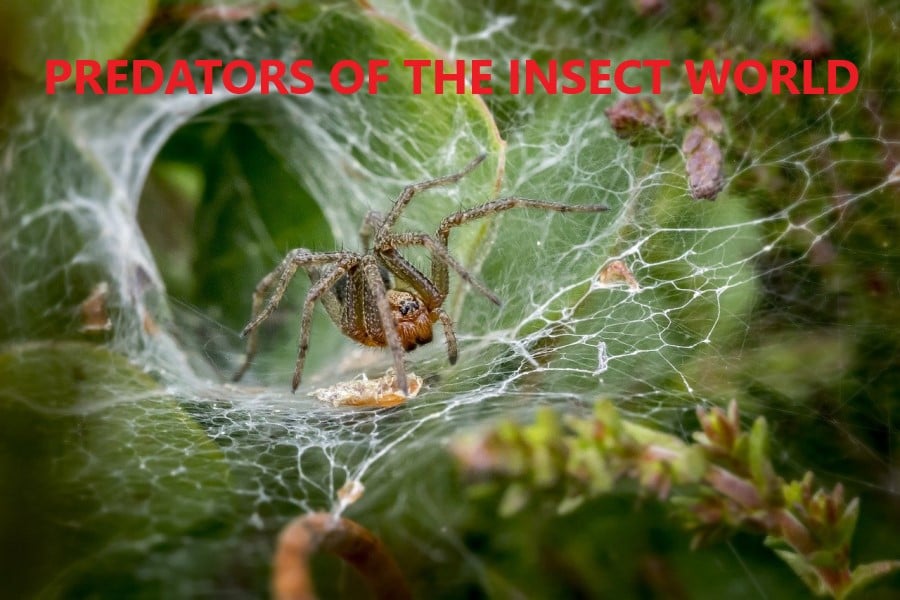 Above All Else, Spiders Are Predators.

Spiders are consummate hunters and killers and in the world of bugs, they are the equivalent of wolves, lions and sharks.

Hunting strategies differ among spider species.  Some build fantastic webs to capture passing insects, like the Orb Weavers, while others, like the Wolf spider, stalk its’ prey on the ground. Even more interesting are the spiders that lie in wait inside a flower to surprise feeding insects, or the Trap door spider that ambushes its’ prey from a cleverly built hole in the ground, that has a door hinged with spider silk, from which it suddenly emerges to capture a passing meal.

Spiders historically have found their nesting sites and prey in the wilds of open spaces, forests, scrub-lands, deserts and even on sandy beaches.

With mankind encroaching on all of these habitats, spiders have evolved to also occupy our landscaped areas and some of them, have found their way inside our homes and other structures.

Brown Widow, Southern House Spider, American House Spider, Domestic House Spider (barn funnel weaver), and Jumping Spiders to name a few. The Daddy Longlegs, although not a true spider (they are arthropods related to mites) is typically found inside homes and mistaken for a spider and no, they are not venomous.

They are brought into living spaces and usually spend their entire life cycle in, on or under their native building. If a large number appear at a specific season, it is usually late summer (August and September)—rather than fall, and their appearance usually coincides with the mating season of the species. What you see wandering around the house are mature males looking for mates. While males wander, females and young hide in crawlspaces, storage areas, behind furniture and appliances, in wall voids and in unused rooms.

In general, according to scientists, fewer than 5% of the spiders seen indoors have ever been outdoors.

Outdoor spider species are not really adapted to indoor conditions.  Spiders are “cold-blooded” and not attracted to warmth. When it’s cold, they just become less active and eventually, dormant (to be resurrected when conditions improve). Examples: Orb Weavers, Wolf Spiders, Garden Spiders, Yellow Sac Spiders, Crab Spiders and the fearsome (not) Tarantula.

It does happen that outdoor spiders find their way indoors, but it is usually by accident while they are chasing prey that enters into a structure through cracks and crevices. Another possibility, is that spiderlings, as they take their migration flights (known as ballooning), are swept through open windows and doors into the interior of homes and other structures. This is a good reason to close up cracks and crevices, fix screens and keep our living spaces buttoned up tight.

Spiders may serve as one of natures insect population controllers, but their creepy, crawly selves are not welcome in our homes.  A spider infestation needs expert handling with proven effective control methods.  Corky’s provides just such a program that works year-round.

Since spiders are a sign that there may be other insects in abundance on your property, Corky’s Ultimate Pest Control Service, for ants and spiders, includes treatments to control plant insects (aphids and whiteflys), ticks, mosquitoes and more.