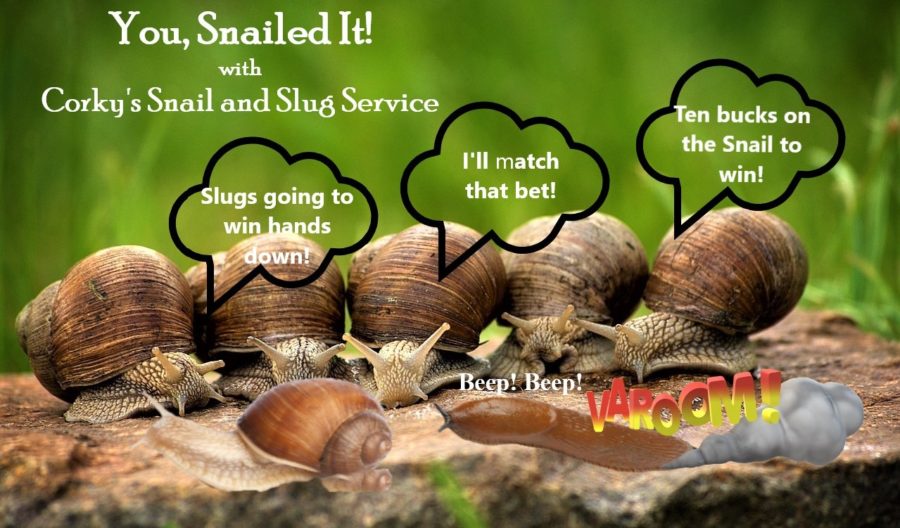 Snails and Slugs: Slow, But Sure to Ruin Your Garden!

Snails and Slugs,  may be slow but the damage they do to ornamental plants, vegetable gardens and citrus orchards is devastating and costly.
These gastropods, have eaten and slimed their way into the top 5 most unwanted pests in the garden. 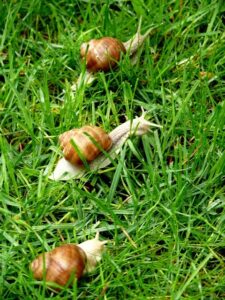 Typically you will find them in droves or more correctly a “rout or walk” , wandering around the garden or on lawns  early in the morning,  after it rains or when you’ve water recently.  Both Slugs and Snails need moisture to survive.  Their bodies tend to dry out quickly without  it.  They also tend to hide in shadow-protected areas during the day, coming out at night to forage.
The majority of Land snails, graze on plants, fungi, and algae and a few species are known to be carnivorous and feed on other snails and nematodes (tiny worms). 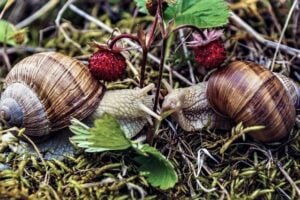 Slugs on the other hand are shell-less, damage root crops

and spend most of their time below ground,  surrounded by moist soil.  It is a myth that slugs are just snails without shells.  They are closely related but completely different animals.
Why is it so important to control snails and slugs in urban and suburban landscapes?  Besides their ability to destroy garden vegetatio 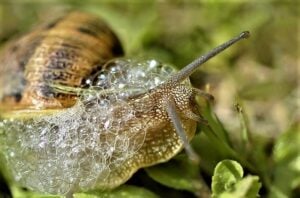 n, they eat fruits and vegetables and leave slimy, silver trails wherever they crawl.

Snail slime (mucus) can harbor parasites and diseases which can easily be passed on to humans. Snails, especially, attract other unwanted animals such as rats and other rodents, who bring along their own entourages of fleas, ticks and diseases.

It’s not only humans that find them a delicacy.  If you have a lot of empty snail shells lying around, you most likely have a rat population living on or near your property.
Getting rid of either of these destructive pests takes persistence.  Besides using baits or traps to control populations, snails need to be manually removed so that future generations are more quickly eliminated.  The best way we have found to eliminate snail and slug populations on our customers properties, is to use an effective, organic bait, in combination with

physically picking up, bagging and removing visible snails on a regular basis. Organic bait consisting of iron phosphate, which stops snails and slugs from eating, causes them to become inactive, promoting death within a few days.
In California, when snail populations become out of hand, homeowners and growers alike, encourage natural predators (birds, beetles, turtles, snakes etc.).  But when these weren’t fast or efficient  enough,  worried citrus growers imported a predator (from Europe) that devoured the native snail species.

This predator, the Decollate snail, does its’ job very well, maybe too well. It not only feasts on the Garden snail, it eats all types of snails along with seedlings, small plants and flowers.  Its’ appetite has placed it on the “Invasive species” list and it has become outlawed in many Counties in California and elsewhere.
Staying on top of a snail infestation is time consuming and populations can quickly get out of hand.  Corky’s Pest Control has developed a successful service program and can get rid of snails and slugs, so that gardens and landscaped areas can be beautiful and slime free.  Corky’s Snail and Slug Service is only available to our annual Ultimate Pest Control Service customers as an addon benefit, at a huge discount.  Call 1-800-901-1102 and get the Ultimate Pest Control Service plus Snail and Slug Control today!  You can also set up service online at: https://www.corkyspest.com/order-below.html 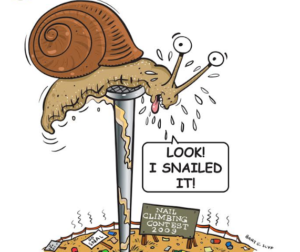