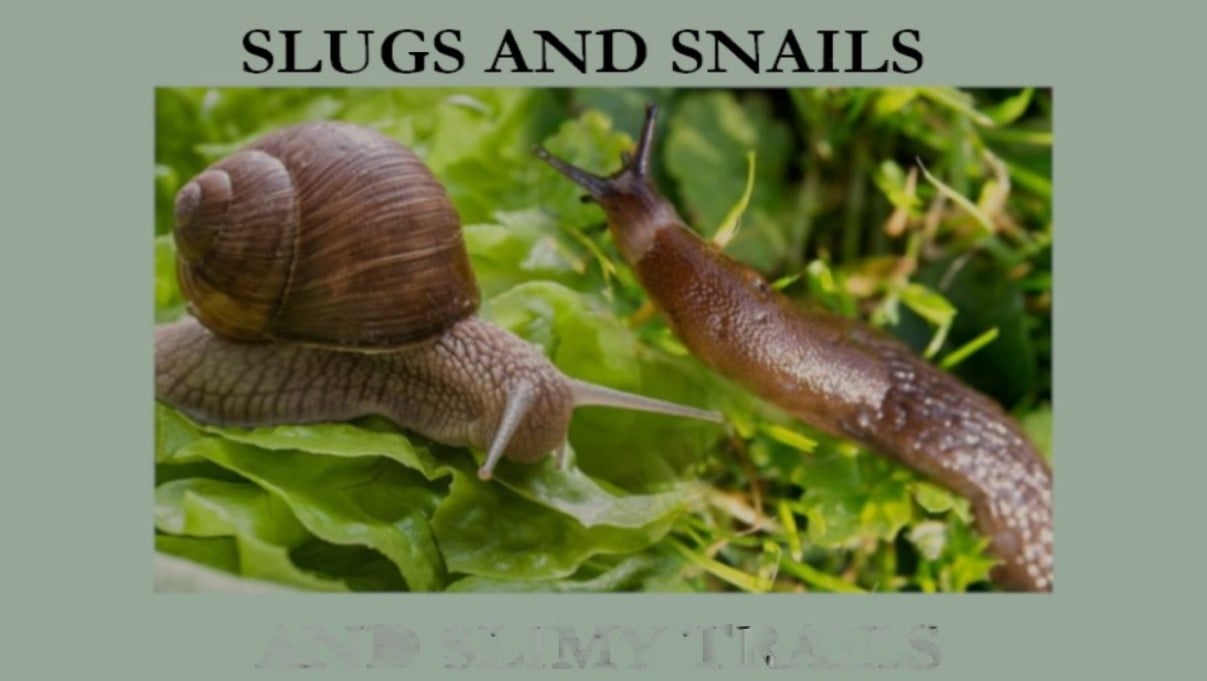 SLUGS AND SNAILS AND SLIMEY TRAILS

Snails and slugs are members of the phylum Mollusca, along with, clams and oysters as well as squid, cuttlefish and octopus.

Slugs  evolved from snails and many species still retain a vestigial shell hidden under their mantle. The remnant shell is used primarily for calcium storage, rather than protection. Slugs protect themselves by producing a thick mucus that coats their bodies.  Body mucus, is very slippery and makes picking up and holding on difficult for predators, it also can be very bad tasting.
The slug’s cousin, the snail, has an outer shell that he can pull his soft body into for protection. The snail needs to have large calcium deposits in its environment to form this more substanti 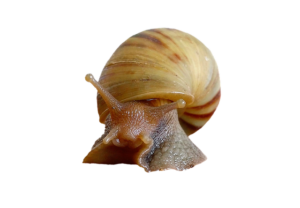 al shell (they often feed on empty snail shells, cement or inorganic limestone for their calcium content). The shell serves as a safe refuge from smaller predators (birds, rats etc.) as well as protection during dry weather conditions.  Slugs are not snails and vice versa, therefore, they do not interact socially, nor do they mate with one-another.
Slugs and Snails are gastropods. The name Gastropod, means, “stomach-foot”.  They move by rhythmic, muscular contractions of their “foot”.  At the same time, they secrete a wet mucus which helps protect their 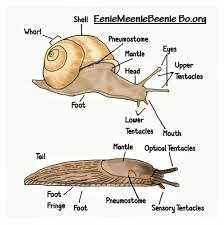 soft bellies and smooths the ground in their path of travel.  Along with one foot on their stomach, they have two eye stalks  on their head that move independently and that are also used for smelling.   Other organs on their face include, tentacles for feeling and tasting and mouthparts containing a radula (tongue-like organ) that has thousands of tiny tooth like spikes called denticles. These teeth shred garden produce and make holes in leaves, fruit rinds and even the morning paper.  Other body parts include the anus, genitals (which in the snail are outside the shell. No pooping in the house, of course) and a respiratory pore or pneumostome (on their right side) that leads to a single lung.
Slugs and Snails are all hermaphrodites (having both male and female sex organs) and can fertilize themselves, but they can also mate. 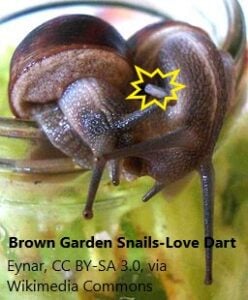 For those snails that choose mating, love can really hurt!  Cupid has nothing on snails and slugs when it comes to shooting “Love Darts”.  This mating ritual is more like a stabbing.  Darts introduce a hormone-like substance into the body of the stab-ee,  that enables far more sperm to survive, favoring the reproductive outcome for the stab-er.  It’s all about DNA superiority.
Slugs prefer to show their acrobatic skills, by hanging from threads of mucus, upside down, while mating.

Slug sex can be brutal and gory. Slugs can come away missing important parts or finding themselves stabbed in the head for their troubles.  Both participants lay small, round, pearl-like, translucent (younger) eggs  in clusters of a dozen or more (over 500 eggs in a lifetime; average 40 eggs/cluster) in shelter

ed cavities near the soil surface or under organic litter on the soil surface, if the soil is moist. As eggs mature they turn white and can take from 2 weeks to a month to hatch, depending on the environmental conditions.
After fertilization, Snail eggs go through a process of growth, inside the snail (about 60 in a clutch), until they are ready to be delivered. After that, both snails involved in a mating, lay their eggs and bury them in separate places inside a small hole made in topsoil, in a cool place.

It will typically take a snail egg two to four weeks to develop. As soon as they hatch, they immediately go into survival mode. Their first mission, is to find sources of calcium either by eating the remains of their egg or eating other eggs that have not yet hatched to get the extra nutrients in order to start building  and hardening their shells.
Not that snail/slug sex isn’t interesting but the snail’s shell is a fabulous construction and unique to the animal world.  Calcium carbonate is the primary ingredient in snail shells (though small amounts of protein also go into the mix). In order to build these shells, the mantel creates an electric current that helps the organism push calcium ions into place thickening and shaping the shell.

Snail shells always coil to the left or to the right. The lefty or righty thingy varies from species to species, but most snails are righty-shelled. But, in some species, the shell can coil in either direction.
If you were to cut open a snail shell, you’d notice several main layers in the cross-section. At the surface, there’s the periostracum, a thin outer layer usually made with organic material. Below that, you’ve got a layer of hard calcium sitting atop a blanket of nacre — a resilient composite material better known as “mother of pearl.”
Snails have a unique  method for fixing cracks in their shells: Calcium and protein secretions from their mantles are used to help strengthen the damaged area.
Did you Know?  The spiral in a snail’s shell is the same mathematically as the spiral in the Milky Way galaxy, and it’s also the same mathematically as the spirals in our DNA. It’s the same ratio that you’ll find in very basic music that transcends cultures all over