Here in California, the brown recluse spider has been elevated to a major urban

legend alongside UFOs, Bigfoot, the Jackalope and Elvis.

There is a great “fear” of brown recluse spiders in California, mostly because of misguided and sensationalized media hype. So say spider experts from the entomology department at the University of California, Riverside.

The common name “brown recluse spider“ refers to one species of spider, Loxosceles reclusa, which lives in the central Midwest: Nebraska

south to Texas and eastward to southernmost Ohio and north-central Georgia. It gets its name from its color and its shy, reclusive, nocturnal nature.

This species of violin spider is not native to California and only a handful of these spiders (less than 10) have ever been collected here.  Of those that were, there was some relationship between the spider and a recent move or shipment of goods from the Midwest.

There are other Loxosceles spiders in California, the most common

also known as a Chilean recluse, which is supposedly more venomous than the brown recluse, inhabits a small area of Sierra Madre, Alhambra, San Gabriel and Monterey Park. According to researchers, there has not been one verified bite incident involving L. laeta in California because they mostly live in basements and steam tunnels and they rarely, hang out in plain sight, in people’s homes.

Rick Vetter, a retired University of California, Riverside entomologist, along with lead author Dr. W. Van Stoecker and Dr. Jonathan Dyer, both dermatologists in Missouri who specialize in treating brown recluse bites, have co-authored a recently-published paper in JAMA Dermatology that describes skin conditions that are often misdiagnosed as bites from the much maligned, brown recluse. Their paper introduces a mnemonic device — NOT RECLUSE — that describes the most common skin conditions that are misdiagnosed as a brown recluse bite.

Not Recluse: Red, elevated and persistent or chronic wounds.

Recluse bites are whitish blue or purple (not red), flat (not elevated) and don’t last more than three months.

So, if a patient has a wound that is elevated or red or persists more than 3 months, something other than a brown recluse bite should be considered.

A red lesion would indicate a bite or sting by another insect/spider or might be a bacterial infection caused by :

streptococcus or anthrax or the result of both.

According to Dr. Vetter, brown recluse spiders are no longer than a half-inch in body length and have a dark brown violin shape on their body. They are venomous, but about 90 percent of bites self-heal, ab

out 10 percent result in a rotting flesh lesion, and less than 1 percent cause a systemic reaction that can be fatal.

There is no denying that necrotic wounds are occurring in California but as long as people keep the myth of the brown recluse, alive, the real causes of these wounds will continue to be misdiagnosed and effective trea 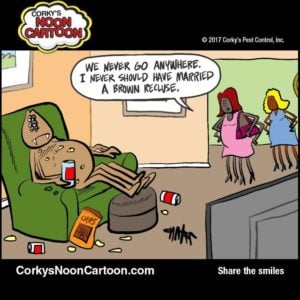