In their quest for world domination, Argentine ants have successfully conquered 6 continents and many islands.  How did they do this?  Easily, their multi-queen colonies, adaptive abilities (conquering changes in their environment) and their nomadic lifestyles), have made them “hard to kill”. 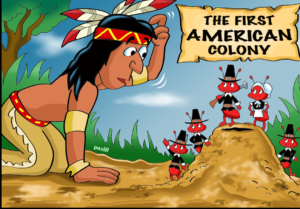 The first Argentine ants disembarked, in New Orleans, from ships carrying coffee from Brazil. Originating along the banks of the South American, Parana River, in a tropical ecosystem, Argentine ants have become a major nuisance in the southwestern United States including California.  They are now thriving in urban areas where non-native landscape and plenty of irrigation fosters beautiful tropical environments.  As an invading species they are a natural and economic threat to native ants by aggressively competing for life sustaining resources and pollinators by protecting plant pests such as aphids and scales that provide them with a food source, honeydew, while the makers of their food source destroy landscape plantings and crops. 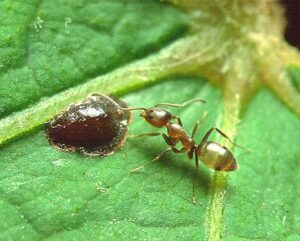 Being extremely aggressive, these ants out compete native species for food and other resources by employing “Chemical Warfare”.  During battle, Argentine ants produce secretions that serve them in two ways, first they irritate and incapacitate their foe and second, this same secretion attracts other Argentine ants to the war zone where they aggressively join the battle. 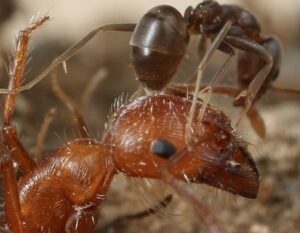 A single colony may contain 10,000 female workers, and there may be hundreds of colonies around your home; the total number of ants could easily reach a million. 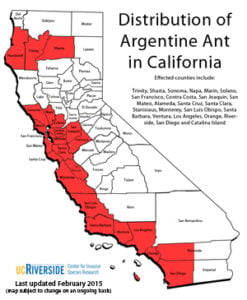 Although they cannot sting, they can and do bite.
Native ant colonies, for the most part, are extremely territorial and will fight other colonies of the same species. Argentine ants in the United States are all closely related with very similar DNA, since originating from the first colonizers in Louisiana. They seem to accept ants from different colonies as members of their global family. It has even been observed that, Argentine ants from different colonies will “join forces” and attack together in huge swarms. To Argentine ants, victory is simply a numbers game and they don’t care if the enemy is Goliath and they’re David.
In their case, size doesn’t matter. It’s not the size of the ant in the fight it’s the size of the fight in the ant and maybe who has the best weapons.

If you suspect you have an argentine ant invasion or any ant invasion, here is a link to our ant control experts.