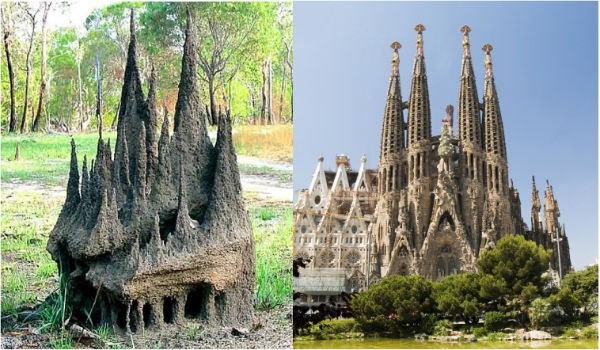 Architects and Engineers; Bio-Inspired to Design and Create by Nature’s Finest Builders, Insects!

Architects and engineers are turning to the insect world for ideas on creating the homes, working environments and products of the 21st century. Bio-Mimicry is Bio-Inspiration at it’s finest.

Scientists believe that, as fossil fuels dry up, termites, ants and spiders can offer valuable insights into how to design more environmentally-friendly offices, bridges, homes and products.

“Animals use materials not just because they work well but because they are efficient,” said Dr. Mike Hansell, senior lecturer at Glasgow University’s Institute of Biomedical and Life Sciences. “Natural selection says the rewards go to those creatures who get most benefit out of their investments, so an animal’s structure will use as little energy as possible.”

Architects have much to learn from the insect world, according to Dr. Hansell, who has been researching animal building behavior for 30 years. “We need to investigate them much more thoroughly. We can see things insects are doing that we do, but they’re also doing things which we haven’t cottoned on to yet,” he said.

“Termite mounds are an inspiration. They adjust ventilation rates to control temperature and some shape their mounds in relation to solar positions,” he said. 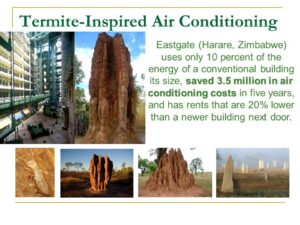 Spider webs also have much to offer in the way of design inspiration. “You can see parallels between their attachment devices and man-made suspension and cable-stay bridges. You look at a spider’s web and realize the ingenuity that is going on,” said Dr. Hansell. And aircraft carrier designers can learn from the way in which webs are designed to catch flies travelling at high speed without breaking or risking a “trampoline” effect. The spider web is one of the most advanced structures in nature; in form, function and design.

remarkably cool inside, even in blistering heat. The insects accomplish that feat with a clever system of air pockets, which drive natural ventilation through convection. The Eastgate Centre, a large office and shopping center in Zimbabwe, South Africa, is cooled much the same way, with the outside air (like the termite mounds). This system uses only 10 percent as much energy as conventional air-conditioning to drive fans that keep the air circulating.

Bug-Bots in our future. A team of researchers from Harvard University has developed a team of robots that can build architectural structures based on the behavior of termites.

Modeled on the way the insects build huge and complex mounds, the little bricklayers individually follow a set of predetermined rules, working without a design plan and without communicating with each other. Just like real live termites do.

The Harvard University researchers showcased the results of their research by making the robots build a small castle. Although the work progresses slowly, they say the self-directing robots are ideal for building in dangerous or hostile environments such as earthquake areas, war zones, under the sea or on uninhabited planets.

her type in the United States. Completed in 1883, it connects the boroughs

of Manhattan and  Brooklyn by spanning the East River was the first steel-wire suspension bridge. It has a main span of 1,595.5 feet (486.3 m)..

The Ting Kau Bridge, Hong Kong, is an example of a cable stay design which reduces the resonance (vibrations) and the cost of the bridge. It saves tons of steele and also makes possible the transportation of heavy trains, cars and traffic.

The cables used to

construct this bridge are made of steel, which is one of th

e strongest materials nowadays. However, technology and designers are searching for other kinds of materials that can be less destructive to nature and as strong as the steel, such as synthetic fibers inspired by natural elements like the spider web.

Honeycomb Tires are a marvel of engineering and can’t go flat.  It doesn’t need air therefore it can’t go flat – which could be a real lifesaver for members of the military. Responding to the government’s need for tires that can support lots of weight, s 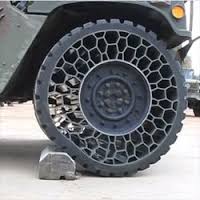 urvive an IED attack and still speed away at up to 50mph, developers Resilient Technologies and Wisconsin-Madison’s Polymer Engineering Center realized that nothing was more perfect than Mother Nature’s design of the honeycomb. The series of hexagon shapes is extremely strong, and distributes weight evenly for a smooth ride.

windows, with their color

The overall ‘artificial honeycomb’ effect gives the building a much more interesting look than would a conventional window layout.

For more insect inspiration check out this site: 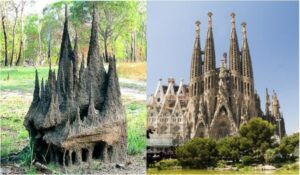