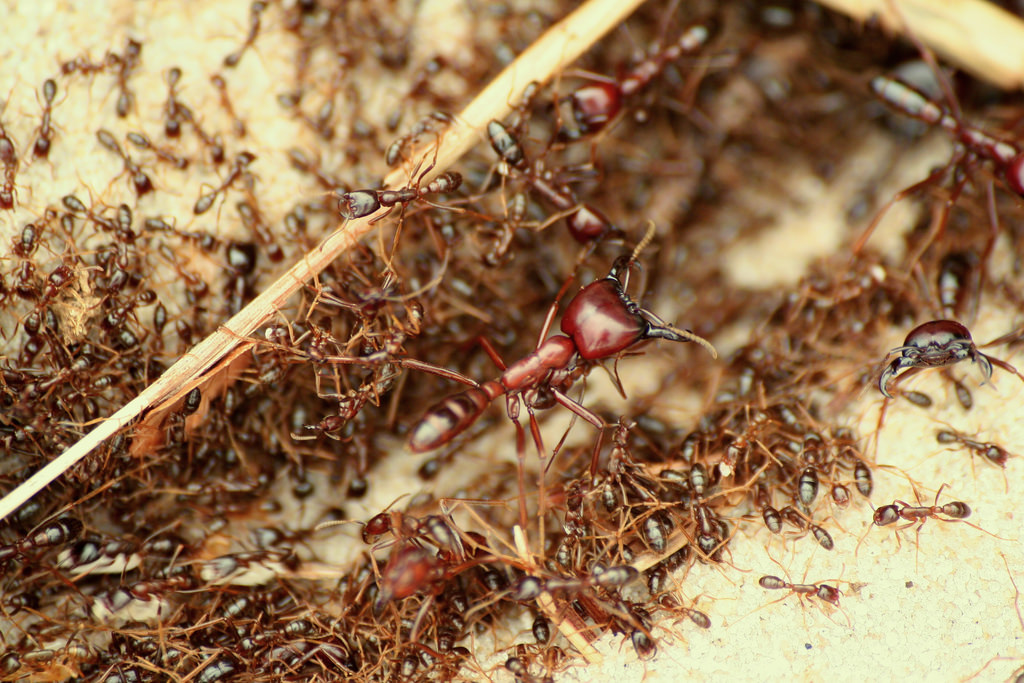 Ants are one of the few groups of animals which change their environment to meet their needs.  In their case, necessity is truely the mother of invention.

A single ant is  capable of carrying up to 50 times its own weight, so working together as a colony means they’re able to accomplish impressive and seemingly impossible feats. In fact,  a large army of garden ants can construct an underground city big enough to house thousands of insects, within one week.

ests come in all shapes and sizes. Many species build their colonies underground, but not all. Some build above-ground mounds, while others build colonies in trees.  Some ants will even build a colony within the walls of a building. The exact structure and whereabouts of the nest varies with the species, soil type and situation.

Ants are industrious creatures and excellent builders. Here are a few of their amazing constructs.

Anthills: These nests are created as a by-product of worker ants digging underground tunnels. In fact, ants in general move more 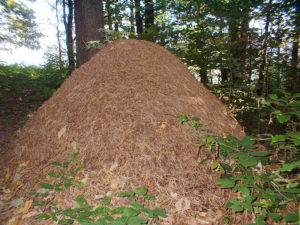 earth (soil) than any other organism, including earthworms. As the worker ants excavate the colony’s tunnels, they dispose of the displaced earth by carrying it back out of the colony and depositing it near the entrance. They also get rid of any garbage found in the colony in this way. They carry these tiny bits of dirt and garbage in their mandibles. Usually, this combination of materials is dropped off at the top of the anthill, so it does not slide back down the hole into the colony.  Some species of ants work hard to create a specific shape to their anthills.

Tree Nests:  Some ants, such as the Carpenter Ant, build their nests 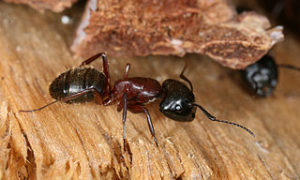 by hollowing out rotting wood; they do not eat the wood. Workers take mouthful-sized chips of wood to the nest entrance, where they deposit the chips. This results in a pile of sawdust at the base of a tree. The nest itself consists of meandering tunnels that are free of sawdust. Nests may be present in rotting wood in trunks, limbs, or roots and even wooden fence posts.

There are a few ant species whose nests are constructed using leaves. The green tree ant (Oecophylla smaragdina) sews together 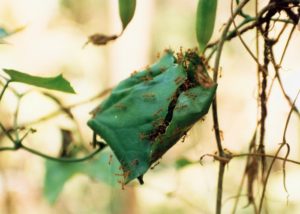 leaves with the silk produced by their larvae. The colony expands by enlarging existing leaf nests or by adding new satellite nests. Other species use plant fibers to construct coverings which are attached to the surfaces of leaves. These ants live within the chamber formed by the covering and leaves.

Rafts:  During floods and heavy rainstorms, passageways and chambers within underground ant nests fill with water and force the evacuation of the colony.  Fire ants have the unique ability to come together as a colony and build an “ant raft” using their own bodies. 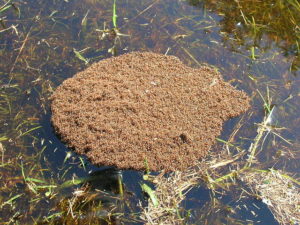 When waters start to flood the colony, worker ants link legs and mouths together, weaving a raft in a process that can take less than two minutes.  The fine hairs on the ants trap enough air that those on the bottom layer of the raft avoid being completely submerged. Fire ants can survive in a raft up to several weeks, although they eventually to need reach dry land if they are to restart their colony. 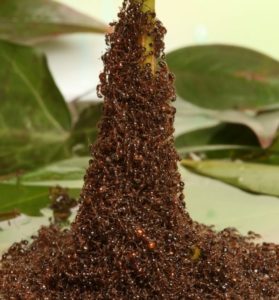 trouble.  Without any planning, using trial-and-error and only their own bodies, they create a bell-shaped tower structure that helps them survive. According to one study, an individual ant, can support as many as three other ants, which it connects to using sticky pads on its feet. Scientists think that their towers act like makeshift shelters until the ants can build more safe and durable accommodations.

hundreds of thousands of ants daily. They are creating shortcuts through their environment saving time and energy, and optimizing traffic flow. Other ant species form structures out of their bodies, but their constructs are not such a huge part of their lives and daily behavior as is the bridge building of the army ants.  Building “living” bridges across breaks and gaps in the forest floor allow their notoriously large and vicious raiding swarms to travel efficiently.

Fun Facts about Ants: On the order of 10 quadrillion ants live on the planet at any given moment. That’s about 1.4 million ants per human, based on a world population of 7.3 billion people.