There are more than 100,000 species of wasps in the world, and they can be found everywhere except the polar areas. They’re easy to identify, with their black and yellow stripes, slim narrow waist and tapered abdomen. A hornet is a wasps chubbier and larger cousin ,that instead of always being black with yellow strips will be black with white markings. 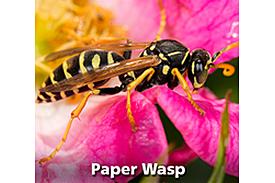 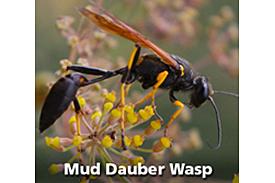 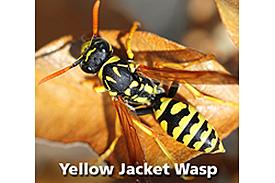 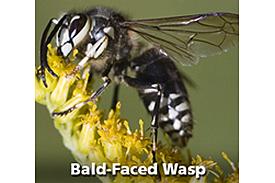 Wasps and hornets will chew on wood and use the resulting pulp to build their distinctive papery nests. You’ll find these nests, which have a honeycomb-style construction, on many horizontal surfaces, including roof eaves, garage ceilings and other places, attached by a single thin thread. Some hornets, like the giant European hornet, may also burrow into the ground to build nests. Their nests may be as large as a foot in diameter.

Wasps are generally divided into 2 groups. Solitary wasps, like mud-daubers, live alone and females are known to lay eggs on other insects, most notably, spiders, which they paralyze by injecting them with venom, then keeping them as food for their larvae. Social wasps (paper wasps, hornets and yellow jackets) live in large colonies with upwards of 100 members, including egg-laying queens and non-reproducing workers. No matter which group the wasp belongs to, only the female of the species can sting. 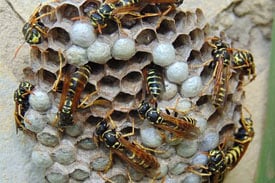 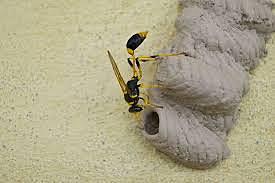 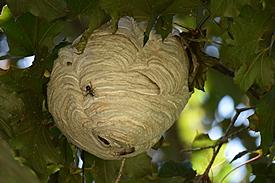 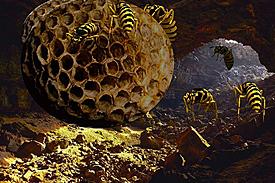 Wasps and hornets will chew on wood fragments and use the resulting pulp to build their nests. You’ll find these nests, with their honeycomb-style segmentation, on horizontal surfaces, including roof eaves, garage ceilings and other places. A few hornets, like the giant European hornet, may also burrow into the ground to build nests. Their nests may be as large as a foot in diameter.

Solitary wasps are not very aggressive, but they will defend their nests, whereas social wasps are aggressive and territorial. Unlike bees, a single wasp can sting multiple times. Their stingers are not detachable, and they do not die after they sting. Their stings can cause some serious pain and swelling around the affected area and in some cases allergic reactions may occur that can result in death. 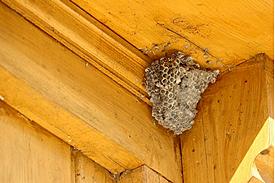 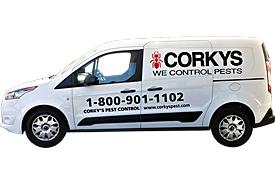 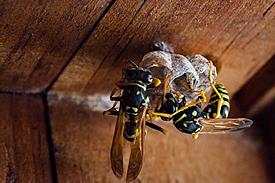 Once wasps begin nesting in your yard or on your home, it is difficult and can be dangerous, to get rid of them.

Corky’s Wasp Control Service is designed to keep you and your family safe by treating the wasp nests, then removing them. Our technicians will also treat the area the nest was removed from, removing pheromone traces that might attract wasps back to the area. Even after a control service, stray wasps (those not in the nest at the time of treatment) may still be seen in the area. It’s important to observe their activity and respond quickly when new nests are being started.

A year-round control service is important as wasps migrate from neighboring properties. Corky’s Ultimate Pest Control Service provides guaranteed year-round protection for ants and spiders and control for aphids, whitefly, ticks, mosquitoes and more. You can add wasp control at no extra charge once an initial wasp control service has been performed.
Don’t risk a wasp attack. Call Corky’s today 1-800-901-1102 or schedule a service online.