Termites or Ants? That is the question!

Termites resemble ants, but their bodies are wider and softer than those of ants. Termites have shorter, smaller legs and move slower than most ants do. While both species have four-winged adults, termite wings are all the same size while ant wings are noticeably larger in the front than the hind pair. Termite antennae are straight and ant antennae are elbowed. Termite wings are twice as long as their body. Ants have a distinctly segmented, thin-waisted appearance, whereas, termites have a broad or thick-waisted appearance. 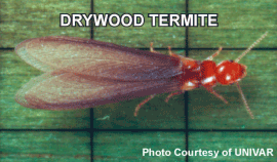 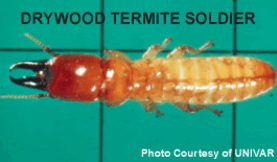 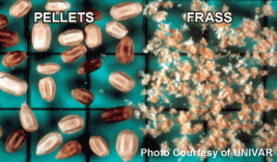 The Western dry wood termite accounts for most of the dry wood termite damage in California. It is found throughout the southwestern states, as far north as Sacramento, with heavier incidence along coastal areas. The Western dry wood termite resembles the subterranean termite, except that it is larger (about ½ inch) and it is reddish brown in color. The swarmer’s, or winged adults have reddish heads as opposed to the subterranean winged adults that are all black. These termites require no soil contact, minimal moisture and they can infest dead tree limbs. Colonies of drywood termites are small but multiple colonies may be in one structure. They are usually noticed from the piles of fecal pellets that they eject from their kick-out holes. The drywood termites pellets accumulate below these holes and resemble sand in color and texture.

A mated pair of winged adults will form a new colony once they drop the wings and enter a structure through cracks or crevices in March through June of each year. The wings are longer than the body, a sure sign that they are not ants. They look for bare wood and then create a chamber, where they then mate and raise their brood. Eggs hatch in about 2 ½ months and become nymphs, false workers, or soldiers. Nymphs can quickly take care of themselves, and will also tend to the queen and king. The false workers will obtain food and tend the nest, while the soldiers, which have larger heads, defend the nest from invaders. There is no true worker caste. A queen can live for 15 years, during which the colony may grow to thousands of nymphs. A single structure can also be host to multiple colonies. 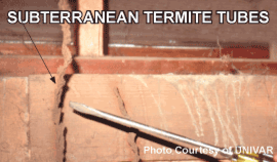 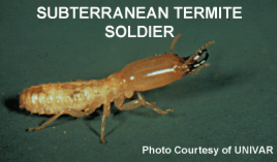 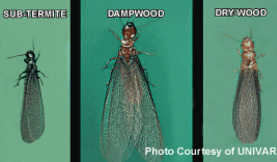 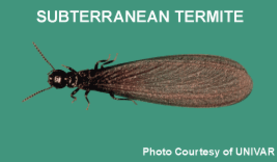 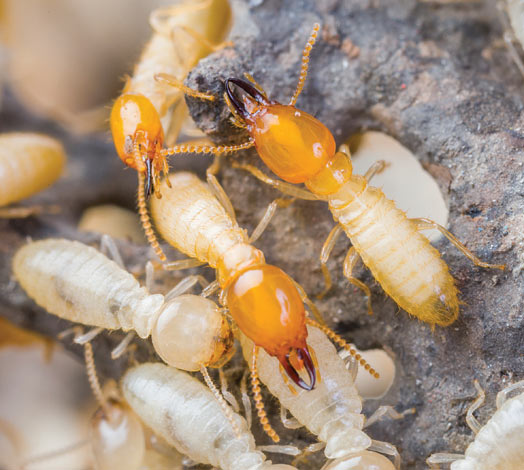 As their name implies, these termites live underground. These are the termites that probably cause the most overall damage to structures. Workers and soldiers are about 1/4th inch in size, while the reproductive males and females are about 3/8ths inch. Soldiers have a larger head with long mandibles. The reproductives are dark brown, while the workers are a colorless gray. Workers will eat any damp wood, and even damp carpets, to feed the other members of the colony. Even the nymphs will chew on wood. They have a high humidity requirement, and form tubes extending from the ground to travel in search of wood. The tubes are formed from saliva, soil, and bits of chewed wood. Tubes may also be used as shelter, migratory paths, and an exit for swarmers. Extreme damage usually takes years to develop, and the interior of wood is eaten leaving behind the outer shell, and any harder wood portions the termites didn’t want to finish.

Eggs take about 50 days to hatch. After the first year, several fertile females assist the queen in laying eggs, so a colony can grow quite rapidly. Growth progresses through up to seven instars, which takes about two years. The whole egg to adult process can be 3-4 years in length. Adults will swarm anytime from January through April. The males and females pair off, drop their wings, and burrow into the ground in search of wood and a place to start a new colony. 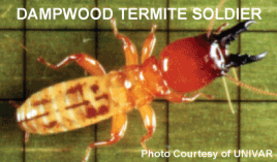 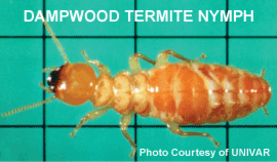 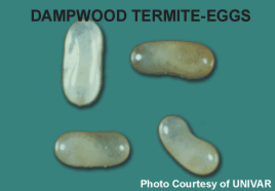 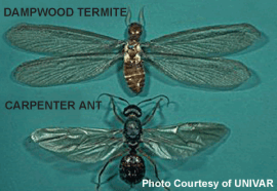 Dampwood termites will often be seen swarming during the late spring and on into the early winter, depending upon the species. Despite the name, they will attack any wood, although they prefer wood that has been subject to moisture and decay, especially if there is no contact with the ground. Some will even form colonies in trees. Dampwood termites often work their way upward from ground level, eventually reaching the roof rafters. There are only two castes–soldiers and reproductives, the work of the colony is actually done by the nymphs. A colony may have up to 4,000 individuals.

Swarming occurs in late spring to early winter, especially after periods of rain. The female creates an opening in wood, the male enters, and around two weeks later about a dozen eggs are laid. A second batch of eggs are laid later in the year. Nymphs eventually emerge and become soldiers or reproductives. 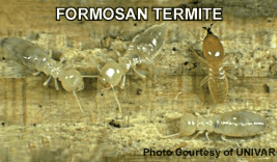 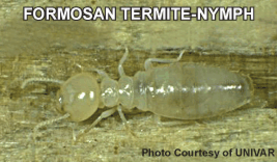 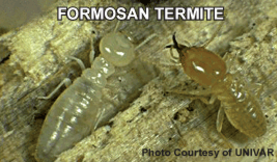 The Formosan termite is the most destructive type found in the United States. Some people call it the “super termite” because it has extremely large colonies and can do major amounts of damage in a relatively short period of time. The termite is native to the Pacific islands, and was most likely brought back to the U.S. on ships returning from World War II. It infests most of the southeastern states and has also been found in California.

There can be up to eight million Formosan termites in a single colony—much larger than any other termite colony. The tunnels and tubes will branch out up to 300 feet in every direction, searching for wood to devour. They will eat anything containing cellulose—plants, lumber and wood products, cardboard and paper, etc. They have been known to chew through foam, some thin metals, plaster, and even asphalt to reach food.

Formosan termites look just like any other subterranean termite, with the exception of the soldiers. They have a large, dark mandible (jaw) which can cross and form an “x”. Despite their fierce appearance, their bite is harmless to humans. A colony of Formosan termites will contain a larger number of soldiers than other types of termites.

The actual nests (called a “carton” after the hard chew-up material from which they are made) grow quite large and have a rock-like appearance. They must be located near a source of moisture—plumbing or roof leaks, watered plants and landscaping, air conditioning condensation, areas where puddles form, etc. They can be in attics, walls, trees, or even underground.

Thousands of Formosan termites will form swarms, usually in the evenings from April through July. These alates are attracted to lights, and then will find a mate. The new king and queen find crevices in wood to start a new colony. About 20-30 eggs are laid in chambers they create. In 2-4 weeks, the larvae hatch out and are fed by the king and queen. Formosan Termites have castes—the soldiers, workers, and reproductives. As the colony grows, reproductives lay more of the eggs, workers tend the eggs and search for food, and soldiers defend the colony. It takes 3-5 years for a colony to reach the large numbers of termites.

If you see termites in your home, contact us. We’ll be able to inspect your property, perform identification, and recommend a course of action.