Here are the most prevalent scorpions found in Southern California.

​Scorpions are easily distinguished by their crablike appearance, pair of pincers, four pairs of legs, and long, segmented tail ending with an enlarged segment bearing a stinger. Although they have two eyes in the center of the head and usually two to five more along the margin on each side, they don’t see well and depend on touch. When running, they hold their pincers outstretched, and the posterior end of the abdomen is usually curved upward. Scorpions that hide under stones and other objects during the day tend to carry their stinger to one side, whereas burrowing scorpions hold their stinger up over their backs. They are nocturnal predators, feeding at night, on a wide range of insects, spiders, centipedes and even other scorpions. Larger scorpions can feed on small lizards, snakes and mice. 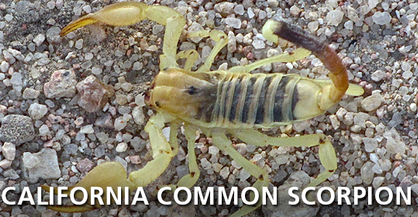 As their name implies, these scorpions are fairly common and can be found everywhere from Progreso, Baja California Norte, to Marin County and Lake Tahoe California. It can be found in almost every type of habitat, from coastal dunes to high-elevation conifer forests. The genus Paruroctonus is the largest in North America, north of Mexico. Unfortunately, most species are indistinguishable from one another except when examined under magnification. Generally, all members of the genus have a series of long hairs on the dorsal surfaces of the feet (bristlecombs) which are more highly developed in sand-dwelling species and all species lack dorsal spines on the segments of the tail. In most cases, the apendages (hands) of the pedipalps are quite large. At maturity they range from 2 to 3 inches long. Although there are color variations, most of these scorpions lack pigment and appear clear tan to pale yellow or orange.

This is one of the most common scorpion species in Southern California, Arizona, and the United States. It is a burrowing scorpion that is often found in sandy soil but can survive in a variety of habitats from desert floor to rocky hillside. At maturity, the stripedtail scorpion is about 2 1/2 inches long, and the body is striped on the upper side. This scorpion is venomous but not considered dangerous unless allergies to its’ venom are present. It may be found under common objects such as sleeping bags, shoes, and other similar items.​​ 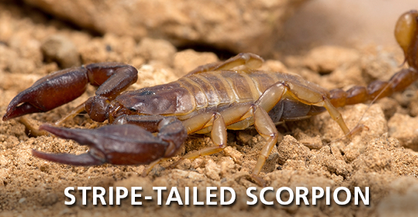 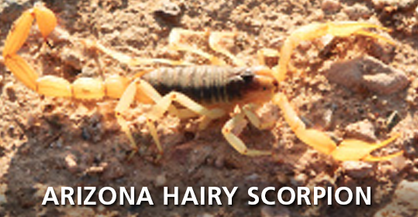 This common desert species is found in Southern California and throughout Arizona. In Southern California it has been reported in Imperial, Inyo, Kern, Los Angeles, Riverside, San Bernardino, and San Diego counties. At maturity it can be 5 to 7 inches long. Like many other desert scorpions, the Arizona hairy scorpion is a burrower but may also be found under rocks, logs, sleeping bags, and other surface objects. This scorpion can often be found around homes and in garages. It is a night feeder attracted to water, swimming pools, irrigated areas, or outside lights where food prey such as beetles, cockroaches, crickets, moths, and other insects are attracted as well. During the day it may be found in woodpiles, palm trees, and decorative bark or under loose boards, woodpiles, rocks, or the bark of trees. Like some other scorpions, the Arizona hairy scorpion may enter homes in search of water. Common indoor places where it might be found are dark, cool areas in the bathroom or kitchen as well as crawl spaces, attics, and closets.

This scorpion is found throughout Arizona, in the extreme southeastern portion of California near Arizona, and in southwestern New Mexico. In Mexico, the bark scorpion is found in Baja California Norte, Baja California Sur, and Sonora. The Bark scorpion has the most toxic sting in the U.S. The venom of this scorpion may produce severe pain and swelling at the sting site, numbness, frothing at the mouth, breathing problems, muscle twitching and convulsions. Death is rare and an antivenin is available for severe cases. Children and the elderly can be the most affected by the sting of this scorpion.

These scorpions reach a length of 3 inches and have a very thin tail only 1/16 of an inch wide; the body is yellow without stripes or patterns. The bark scorpion is the only common climbing scorpion and does not normally burrow but usually lives above ground under tree bark and in palm trees and crevices of rocky cliffs. Because it can ascend slump block walls or stucco, this species is the scorpion most likely to enter dwellings. The bark scorpion is attracted to moisture around homes and in the house. It also may be found in stacked lumber or bricks, firewood piles, cellars, and attics. It needs only a crack of 1/16 inch to enter a home. 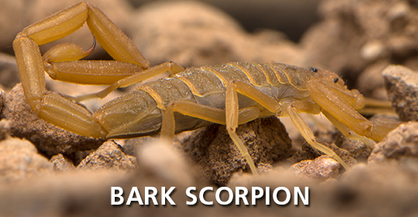 If you do find scorpions in your home, contact us. We’ll be able to inspect your property, perform proper identification, and recommend a course of pest control.