THE CAT FLEA IS THE MOST COMMON IN AMERICA
Fleas live on host animals. 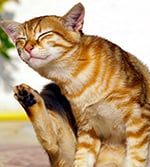 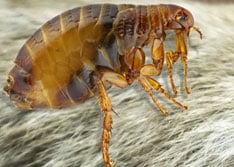 There are more than 2,000 known species and subspecies of fleas. Some of the most common fleas include cat fleas, dog fleas, oriental rat fleas, tropical hen fleas, rabbit fleas and human fleas. Although the names of the fleas usually indicate the preferred host, all of these fleas may choose dogs, cats, or humans as hosts. When fleas become a nuisance our Flea Control Service will help in reducing their numbers.

Appearance: Fleas are approximately 1/16” – 1/8” long and can jump up to seven inches. They prefer warm dark places. Depending on the environmental conditions, the flea life cycle can range from several weeks to several months. There are more than 2,000 known species and subspecies of fleas!

Eating Habits: Fleas feed on the blood of mammals and birds.

Health Concerns: Fleas can be a source of both irritation and disease. Flea bites cause small, red, itchy bumps, usually on the ankles and lower legs. People with allergies to flea bites suffer from hives, rashes or generalized itching. Both cat and dog fleas are carriers of the common tapeworm parasite, which affects both dogs and cats. Fleas found on wild rodents such as squirrels, rats and prairie dogs may bite you and transmit disease.

If you do have fleas in your home, contact us. We’ll inspect your property and provide a suitable flea control treatment.