Earwigs are omnivorous and look to hide in a moist, dark place. 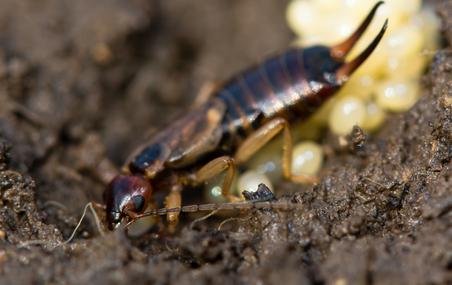 The name earwig comes from Old English eare “ear” and wicga “insect”. It comes from the idea that earwigs burrow into the brains of humans through the ear and therein lay their eggs. This belief is false.

Appearance: Earwigs are easily identified by their large cerci, the forcep-like pincers protruding from their back end. Male cerci are bowed, and female are straight. The body is flattened and elongated, usually black or reddish brown in color. They are typically about a 1/2 inch in length and some species have wings but rarely fly.

Habits: Active at night, hiding during the daytime, they normally live outdoors feeding on plants, decaying vegetable matter, fungi and a variety of insects especially plant lice. They do not establish nests indoors. When found indoors, they have gained access by crawling under doors or through cracks and crevices in the foundation or they were brought in. They are harmless to humans and animals, although if handled roughly, the earwig can give a slight pinch with the, “forceps”, pincers. The dangerous looking forceps are used to hold prey, as a weapon against other insects, and during mating.

Earwigs, themselves, are prey to a variety of predators, including birds, frogs, lizards, centipedes, spiders, tachinid flies and yellow jackets to name a few.

Life Cycle: Eggs by the dozens, are laid in clusters in the ground, and hatch in 8-10 days. The nymphs go through several instars over the next 20-80 days before becoming adults. The female tends to her young until they are strong enough to fend for themselves. There are 1-2 generations throughout the year, developing more rapidly during the spring and summer. They are active, in California, year-round, but are often inactive or hiding in colder or extremely dry hot weather. 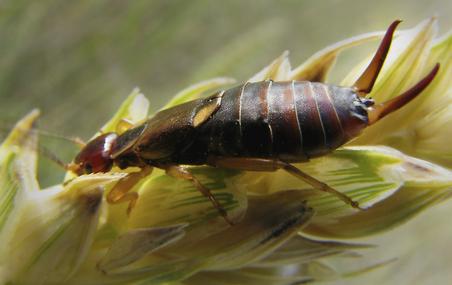 European Earwig – Originally from Europe, the European earwig, was introduced into the U.S. in the early 1900’s and is now common throughout much of North America. This species prefers a diet of aphids to plant material. Adults eat more insects than do nymphs. This insect rarely flies and is adapted to hitchhiking on or in bundles of newspaper, luggage, cut flowers, and even automobiles to name a few.

Maritime Earwig – This insect preys on many different small insects, including fleas, crickets, ants, small beetles, sow bugs, and even other earwigs. Because of their location near coastal waterways and on beaches, maritime earwigs are often found under rocks, seaweed and driftwood during the day. They cannot swim but prefer to stay in “dark, warm, damp and humid places. Another name for this insect is the Seaside earwig. Its’ body is dark with yellowish legs, and it is wingless. 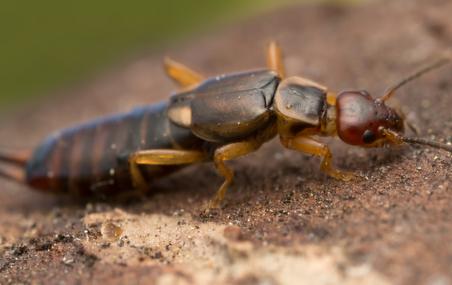 Ring-legged Earwig – Adults are dark brown in color, and wingless. The legs are pale with 2 dark bands.  -This species has been known to inhabit the United States since 1902. Adult ring-legged earwigs can be found throughout the year, except in colder winters, when they will stay underground. A voracious predator, it also eats all kinds of plant material, though it rarely bothers with live plants