Bees are vital to pollination.

WHAT TYPES OF BEES ARE IN SOUTHERN CALIFORNIA?

Bees are vital to pollination.

Types of Bees in Southern California

There are one thousand species of California native bees, 26 of these are bumblebees and most of the rest are solitary bees. The main types of bees we encounter in Southern California are the bumblebee, the European honey bee, Africanized honey bee and the carpenter bee. While it’s easy to differentiate the bumblebee by its fuzzy striped appearance, it is difficult to differentiate the European honey bee from the Africanized honey bee. The difference between them can be verified with a microscope.

Bumblebees are found living in nests in number of 15 to 100 bees. They do not have permanent colonies. The queen starts a new colony each spring. They are twice the size of a honey bee, between 1 to 1 ½ inches long. Bumblebees may be found in cavities in the ground such as an abandoned gopher hole, under sheds, or in other low to the ground places. Bumblebees are seasonal summer bees. When defending their hive they can be aggressive, stinging multiple times without losing their stinger. They are sought after by tomato farmers who know the value of their pollination effectiveness.

Nearly all carpenter bees build their nests in burrows in dead wood, bamboo, or structural timbers. Approximately 1 inch in length, Carpenter bees are one of the largest American native bees. They resemble bumble bees but have a shiny abdomen, where bumblebees have hairy abdomens. Female carpenter bees are capable of stinging, but they are docile and rarely sting unless directly provoked. The males are harmless, since they do not have a stinger. Carpenter bees are pollinators of eggplant, tomato and other vegetables.

If a swarm of bees is spotted in a bush, tree or on the side of your house and the hive is visible, keep the area clear and do not approach the swarm. The bees may be Africanized Honey Bees, which are very aggressive and will respond to intrusion or loud noises. Chances are the swarm is just resting and will move on in a matter of hours. Make sure you make your neighbors aware of the bee hive, so they will keep children and pets away.

HOW CAN YOU TELL A BEE IS AFRICANIZED? 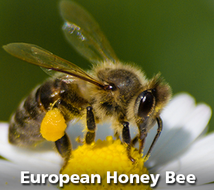 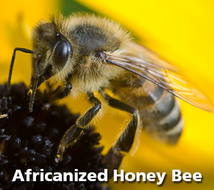 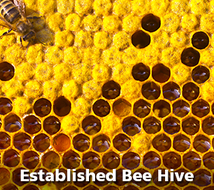 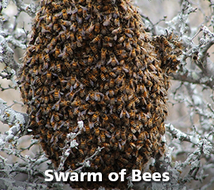 ​It is difficult to differentiate the European honey bee from the Africanized honey bee.

European Honey Bee – The European honey bee is found living in nests of 5,000 to 15,000 members per hive. Honey bees live year around and stay dormant in the winter. They can be seen as a giant swarm migrating or as 5 to 20 bees buzzing around a structural openings.

Africanized Honey Bee – The Africanized honey bee looks like the European honey bee. Though un-noticeably smaller in size, the Africanized honey bees are very protective of their home and can attack to defend it in great numbers. They may stay aggressive for days after being disturbed. They become aggravated by loud noises, and vibrations and are provoked by certain smells such as fresh cut grass, bananas and the breath of mammals.

When bees become a nuisance or dangerous to humans, our Bee Control Service will resolve the problem.