Ants are the most common pests found in homes.

More than 12,000 species of ants are known with about 700 found in the U.S. Only about 25 species will be found inside homes. Some of the ants classified as pests found in Southern California include the argentine ant, carpenter ant, harvester ant, little black ant, odorous house ant, Pharaoh ant, red imported fire ant, Southern fire ant, thief ant and the velvety tree ant. When Ants become a nuisance our Ant Control Service will help in reducing their numbers. 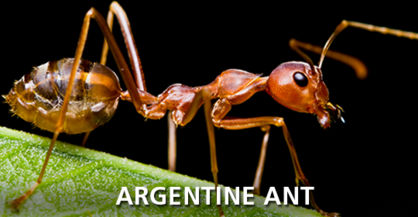 This small non-stinging ant is about 1/8th inch and is a brownish color. They are the most persistent and troublesome ant that invades houses because they are small and can get through tiny cracks. Argentine Ants live in shallow galleries in the ground often only a few inches deep. A single colony has multiple queens and can grow quite rapidly, displacing other native types of ants. They also rapidly establish other colonies when a queen leaves and takes some of the workers with her. These satellite colonies may eventually return, or they may become the mother colony to many new colonies. During the hot summer months, some may even be temporarily established inside homes under carpets, attic insulation, in walls and potted plants.

Life Cycle – The eggs hatch in about two weeks into larvae. The larvae mature into a pupa in about a month, and the pupa stage lasts only 15 days. The whole process of egg to adult can range from as short as 33 days to a maximum of 141 days.

Carpenter ants are one of the larger ants that invade homes and are usually ¼ to ½ inch in size. Despite what their name may imply, they do not actually eat wood. These non-stinging ants tunnel through wood to create their homes and can do considerable damage. They will infest dead trees, telephone poles, and houses but can also be found in lawns. They feed on other insects and juices and are fond of anything sweet. They are liquid feeders and unable to swallow solid foods. Adult carpenter ants have the ability to bite. Each colony has one queen, who lays only a few eggs that become minor workers, who then go out and forage to feed the queen and the young. A colony may eventually contain over 3,000 workers. When they get into houses, damage can be severe and require extensive repairs.

Life Cycle – Females lay eggs in chambers of galleries, which hatch into larvae in about 24 days. The larvae mature into pupa in 21 days. Pupa are encased in cocoons, which are commonly called ant eggs. The pupal stage is also 21 days, so the minimum time from egg to adult is 66 days. 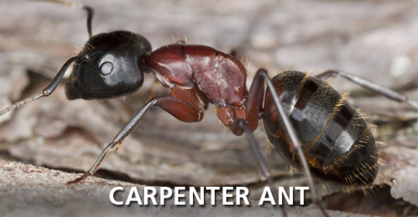 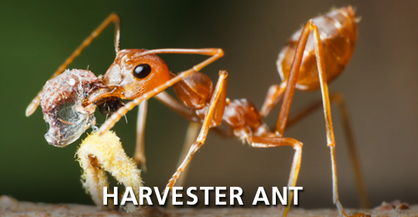 The California variety of the harvester ant is 1/4th inch in size and red colored. Nests are found underground with a small mound at the opening, which is littered with leftover food debris. They generally seek seeds as a main source of food. During the winter, the nest is sealed off and no activity is seen. The harvester ant is known for its ability to sting. These ants have been able to kill small pigs by their sudden and vicious attacks. Harvester Ants will go after people and any small animal that gets too close to their nest. A few types will leave the stinger in their victim just as bees do.

Life Cycle – Swarming occurs several times each year, starting in June and July but most prominently during August and September. The winged ants emerge in large numbers. The male dies right after mating, and the female starts a new underground colony. Colonies can last for several years and contain thousands of ants. The colony becomes less active in temperatures over 120 degrees and during the rainy season.

This very small stinging ant is about 1/16th inch and colored dark brown to black. They build nests underground, under tree bark, beneath rocks, and can even infest woodwork in buildings. They will nest both indoors and outdoors. They will also build nests in lawns and vacant lots. Their favorite food is insect honeydew, but in houses they will go after just about anything such as grease, sweets, meat, fruits, and vegetables. They even eat other insects, both dead and alive.

Life Cycle – Little black ants will swarm in the summer, reproducing and forming new colonies. Each colony can grow quite large and eventually contain multiple queens. 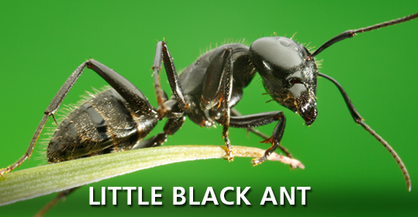 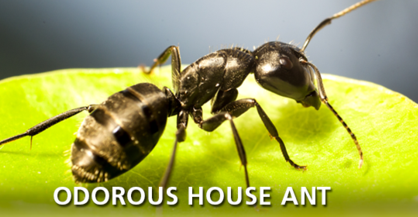 This small non-stinging ant is about 1/8th inch and colored dark brown to black. They get their name from the rotten coconut-like odor that they produce when they are crushed. They routinely invade houses searching for food during the winter, when their usual honeydew food outside is gone. Like the Argentine ant, colonies contain multiple queens and a few thousand worker ants. They nest under stones and pavement and will establish nest inside houses also.

Life Cycle – Females lay only one egg per day, which mature into larvae in 2-3 weeks. They remain as larvae from 2-4 weeks, and then enter a pre-pupal stage for 2-3 days. The pupal stage lasts an average of two weeks before they become adults. Several generations can develop each year, and the females may live for several years. Males only last a few days after emergence.

Pharaoh ants are small, less than 1/16th inch, and are a yellowish to brownish color. This stinging ant will eat just about anything that people eat especially fatty and greasy foods like meat and sweets. As a predator to many insects it can spread bacteria. Their unusual name comes from its original habitat in Egypt. The Pharaoh ant seeks to establish nests in warm and inaccessible locations inside buildings near food. A colony contains many queens and can have hundreds of thousands of workers!

Life Cycle – Eggs incubate for a little over a week, and go through a larval stage of about three weeks. This ant has a pre-pupal stage of three days, and the pupal stage lasts 9-10 days before becoming an adult. The whole egg to adult process can be as little as 38 days under optimum conditions. 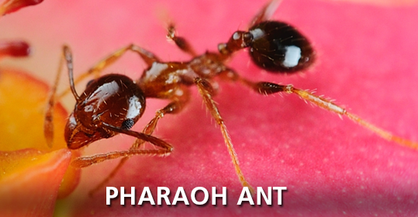 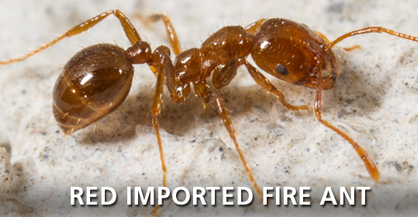 Red imported fire ants have caused destruction throughout the Southeastern portion of the United States, and two species have crept into Southern California. The red imported fire ants are 1/4th inch in size and vary reddish in color, although there is a minor variety that is black. They build large earthen mounds, growing to 20-30 colonies per acre. The mound is usually about a foot high, but some have been reported which have reached eight feet in height. A mound will contain between 30,000 and 100,000 workers. The red imported fire ant will feed on plants, including tree bark, and can be very destructive. Imported fire ants can do major damage to new crops. They will also feed on other insects, eggs and young birds in ground nests.
Red imported fire ants are a very aggressive stinging ant that destroys other species of ant colonies in the area. Fire ants can cause a severe sting, even being fatal when large numbers of the ants attack. They get their name from the severe reaction caused by their stings-it feels like fire! It is very aggressive and likes to sting both humans and animals. Over 1 million people are stung each year by red imported fire ants in the Southeastern United States.

Life Cycle – Eggs develop in 7-10 days, larvae in 6-12 days, and pupa in 9-16 days. The egg to adult life cycle ranges from 22-38 days, a quickly developing ant. Minor workers live from one to two months, while major workers can live up to six months.

The Southern fire ant is widespread throughout the lower altitudes of Southern California. The Southern fire ant is generally a little smaller than the red imported fire ant, but can also cause significant damage and inflict a painful sting. They are up to 1/4th inch long, and have a reddish brown or black color. Their nests are sensitive to vibrations so if a footstep is detected close by, the ants will swarm out to attack. They build mounds, with the nests located under objects like stones, boards, or anything on the ground that provides cover. They will also get into the wood or masonry of a house, and can build mounds. The Southern fire ant can also be a problem to crops. It will eat just about anything and are known to kill young or newborn birds and poultry. It’s been reported that they have eaten the rubber insulation off electrical wiring, causing shorts in wiring. 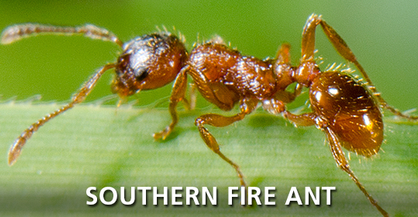 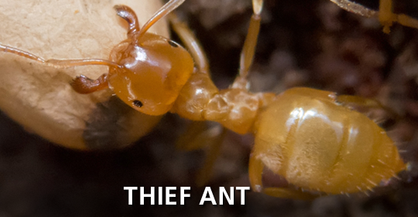 Thief ants are tiny, only about 1/16th of an inch, and are a pale brownish color. Their size makes it easy for them to get into houses in search of food and water. They love meat, cheese and greasy foods. They will also eat dead insects. The nests are in galleries in dirt, and they often build near another ant colony – raiding it to steal food. This is how they got their name. The thief ant will also build inside walls, cupboards, cracks and crevices of structures. They can host diseases and tapeworms as an additional problem for human food. A colony may contain from a few hundred to a few thousand ants.

Life Cycle – Queens lay about 100 eggs, which incubate for 16-28 days. The larval stage varies greatly with temperature, developing in as little as three weeks. This ant also has a pre-pupal stage of 2-11 days, and the pupal stage itself ranges from 13-27 days.

As its name suggests, this ant will nest in trees, particularly those found alongside streams and creeks. They range in size from 1/4 inch to 1/2 inch. These ants are found in the foothill and mountain areas. They will range several hundred feet from the nest, and can invade homes. They will also bring dead insects and other foods back to the nest. Velvety tree ants can bite, and they inject a poison into the wound.

Life Cycle – Velvety tree ants can form huge colonies not only in trees but also in old stumps, and underground. The colony will have a single queen and thousands of workers. Swarming normally occurs in May to start a new colony, but a late summer swarm may also happen. 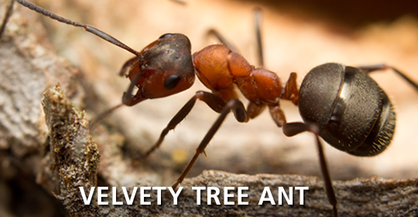 If you do find ants in your home, contact us. We’ll be able to inspect your property, perform proper ant species identification, and recommend a course of ant control.