There are lots of flying insects out and about in our gardens, fields and other open areas and they are all busy at work fulfilling nature’s directives.  So, since we humans are also frequenting these same places it’s important for us to steer clear of these busy creatures because some of them will sting if you invade their space. 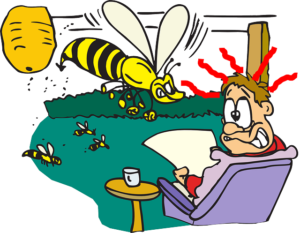 Beware! Being stung is no picnic and can ruin your day!
Here is a short lesson in identification and some important facts.
Bees are fuzzy pollen collectors that almost always die shortly after stinging people (the stinger becomes embedded in the skin, which prevents multiple stings). 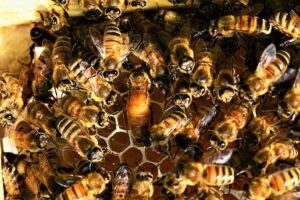 Bees don’t always die each time they sting, though; the primary purpose of the stinger is to sting other bees, which doesn’t result in the loss of the stinger. A bee can generally only sting you once and her death is assured.
The problem with explaining the difference between wasps and hornets is complicated in that, according to most definitions of wasps, all hornets are wasps. 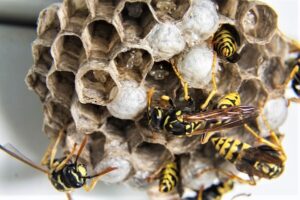 Wasps are members of the family Vespidae, which includes yellow jackets and hornets. Wasps generally have two pairs of wings and are definitely not fuzzy. Only the females have stingers, but they can sting people repeatedly.
Yellow jackets are sometimes confused with bees because they look very similar. With a black and yellow body, it’s difficult to tell the difference between the two at first glance. Yellow jackets are a type of predatory wasp that are part of the 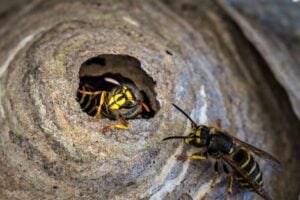 genera Dolichovespula and Vespula. Most are black and yellow, but some, like the bald-faced hornet, are black and white and all the females have stingers.
Hornets are a small subset of wasps not native to North America (the yellow jacket is not truly a hornet). Somewhat fatter around the middle than your average wasp, the European hornet (considered the only true hornet in North America) 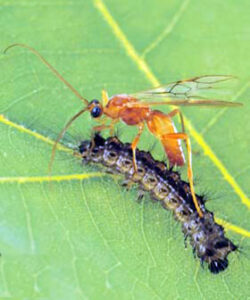 is now widespread on the East Coast of the U.S. Like other wasps, hornets can be extremely aggressive and can sting multiple times.

Bees and wasps have different types of stingers, which affects the amount of venom that they can inject in a single sting. Wasps have smooth stingers, which allow them to sting a perceived threat, multiple times.  Wasps in general are more aggressive than bees (excluding “Killer Bees”) and will sting more than once. Honeybees have barbed stingers that dig into the skin, remaining embedded as the bee flies away.  Not all bees have barbed stingers. For example, the bumblebee’s stinger is smooth, allowing them to sting multiple times, just like wasps. 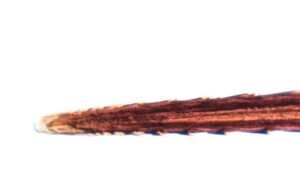 Venom
Bees and wasps inject different amounts of venom per sting. A honeybee, who can only sting one time, injects as much as 50 micrograms of venom in a single sting. As the stinger is embedded in the skin, it continually pumps this venom into the body, so the sooner you remove the stinger, the less venom it injects. It typically takes about 45-60 seconds for the full amount of venom to be released. A wasp injects a significantly smaller amount per sting — only 2 to 15 micrograms — but can do so more than once in a short period of time.

The chemical composition of bee and wasp venom are different but, they produce similar side effects. Both types of venom make your body release histamine, which causes symptoms like those of a mild allergic reaction: itching, swelling, redness and pain at the sting site. Because the venom typically makes the site of the sting sore and achy, applying an ice pack can help dull the pain. The site may remain sore for several days as it heals.

Different people have different reactions to bee and wasp venom. A person with a severe allergy may need immediate medical attention after a single honeybee sting, while a healthy person without a significant allergy can withstand 1,000 or more stings before reaching a lethal dose. If you don’t know whether you are allergic and you’ve been stung, watch out for the symptoms of an allergic reaction, which can develop immediately or within 30 minutes. They include difficulty breathing, hives that spread, facial swelling, chest tightness and difficulty breathing. These symptoms also can lead to loss of consciousness, so if you believe you may be experiencing this type of allergic reaction, contact emergency medical services immediately.
Fun Fact: Bees stopped buzzing during the 2017 Total Solar Eclipse.
on August 21, 2017, while millions of Americans took a break from their daily routines, to witness a total solar eclipse, a similar phenomenon was happening unnoticed nearby: Bees took a break from their daily work schedules, too.

In a first time study of a solar eclipse’s influence on bee behavior, researchers at the University of Missouri organized a group of citizen scientists and elementary school classes in setting up sound monitoring stations to listen in on bees’ buzzing—or lack thereof—as the 2017 eclipse passed over. The results, published today in the Annals of the Entomological Society of America, were clear and consistent at locations across the country: Bees stopped flying (therefore buzzing) during the period of the total solar eclipse.

Eros and the Bees

A bee stung Eros on the nose
While he was smelling on a rose
“Mother Venus, ay,ay,ay
Please help me or I’ll die
What a terrible disgrace
A dragon bit me on my face”!
Venus comforts first her son
then speaks to him with mocking fun:
The little bee’s tiny sting
Is for you an earnest thing
But more painful and real hard
are your stings in human’s heart

“Eros,Venus and the Bees”; the poem is from the Anacreonteia